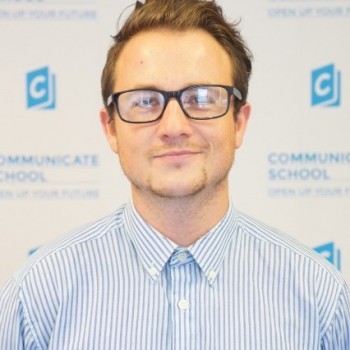 Many of our students here at Communicate School are experiencing life in a different country and acclimatising to a new culture while making new friends from all around the world. The idea of writing poetry was introduced as the students listened to a poem I had written about my feelings regarding the tragic recent events that happened in Paris. None of the class had ever written a poem in English and more than half of them hadn’t written a poem in their native language either.
In groups of 3 students discussed topics they felt strongly about and then they began to brainstorm vocabulary and language associated with their chosen topic. Armed with a large amount of vocabulary students then decided on the feel of the poem and the messages and ideas they wanted them to carry.
Each group then had only twenty minutes to create their poem and present it to the class. During this task students had to test their capabilities in a timed exercise with them also having to work as a team and communicate effectively and efficiently.

The winning group’s poem titled ‘Living abroad’ (below) was written by Aref Alqurashi from Saudi Arabia, Viviana Sanchez Cordero from Colombia and Ziyad Al-Saqry from Oman. 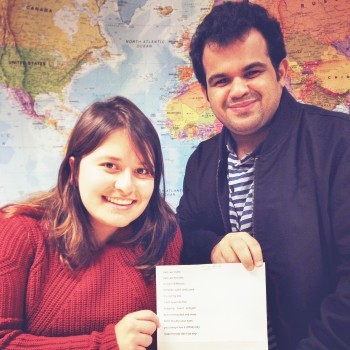 To learn the difference

Between came and come

It will not be hot

But missing dad and mum

You always see a cloudy sky

And don’t be shy